Despite the popularity of Pokémon Go, the game may find itself undercut by imitators due to choices made during the course of filing for patent protection. In particular, the decision to request non-publication in the U.S. has limited patent protection to only the United States.

Pokémon Go is a location-based augmented reality game that promotes physical activity in conjunction with driving traffic to businesses. Players have an avatar that navigates around a map of the player’s current geographical location. Players physically go to Poké Stops and Gyms and attempt to catch virtual wild Pokémon.

Pokémon Go was launched on July 6, 2016 for Australia, New Zealand, and the United States and has been highly successful. In fact, the mobile-based gaming business Niantic, a spin out of Google, had to slow the release of the game in other regions due to server load issues caused by extreme usage. Those restrictions did not stop fans from side-loading the game so they could play before the official release. The game has now been released in most major regions around the world except for mainland China, due to the Great Firewall, and South Korea, due to restrictions on the use of online mapping data. The game has been downloaded over 100 million times.

The business model for the free-to-play game appears to surround sponsorships and in-app purchases of game items such as Poké Balls. Through in-game purchases, the game has generated more than US$160 million by August 1, 20161. Niantic has only recently solicited sponsorships so it is unclear how much revenue the company will generate with those arrangements. Some businesses are capitalizing on the in-app purchases by paying to attract Pokémon to their business2. As users play the game, they are required to physically go to the businesses where Pokémon are located – increasing foot traffic, and providing a potential boon to local businesses.

Clearly the game is a global success, but has Niantic sufficiently protected the game from an intellectual property perspective? Much of the success of the game can be attributed to the Pokémon brand – given that a similar, far less successful game called Ingress was previously released by Niantic3. The Pokémon copyright and trademarks are owned by Nintendo and should sufficiently protect imitation games that include the Pokémon name or characters. However, the underlying technology controlling the functionality of the game necessarily requires some measure of patent protection.

One of the key considerations when devising a patent strategy is considering the strategic direction of the company as a whole and how the patent portfolio will support those goals. For example, if a company is planning on only selling products in a particular region such as Canada, it makes logical sense to only file the patents in Canada.

Potential disconnects between patent portfolios and a company’s business strategies arise when the strategic goals of the company shift after the patent portfolio has been filed.

Strategic goals may shift over time. For example, companies may experience financial difficulties and abandon applications or jurisdictions entirely. In other instances, companies may have unanticipated success in some countries resulting in no patent coverage in those countries. In the Niantic case, their patent portfolio was originally conceived at Google and, at least initially, Google’s decisions on the portfolio influenced its direction. Since a patent term is so long (20 years from filing in most jurisdictions), it is impossible to predict all possible outcomes, and frequently companies and patent practitioners must use their best judgment based on the available information and budget at the time.

Niantic is the assignee of three issued U.S. Patents: Patent Nos. 8,968,099; 9,128,789; and 9,226,106, which are generally referred to as location-based parallel reality games4. Two of these patents also have pending continuations: U.S. Application Nos. 14/820,689 and 14/981,351. The article written by Steve Brachmann on IPWatchdog® provides a good description of how the issued patents correspond to the in-game features. Generally, the patents cover various aspects of a virtual world mapped onto the real world. 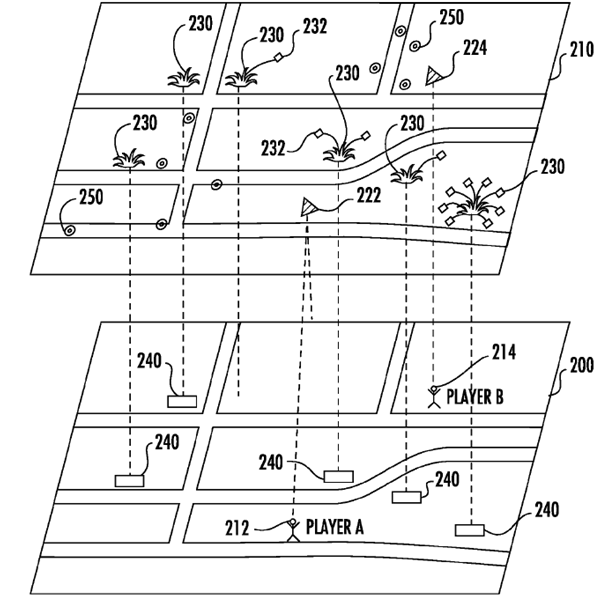 Figure 2 from U.S. 9,128,789 demonstrating a virtual world that parallels the real world. Landmarks 240 in the real world correspond to virtual elements to which players must travel.

The request for non-publication was made so that Google could beneficially keep the subject matter of the patents confidential until issuance. The result is an increased confidentiality on the patents of about 300 to 700 days5 (see table below).

For companies that are closely watched, such as Google, it may be advantageous to control publication to ensure the patent publishes according to the corporation’s schedule. Primarily, the request for non-publication prevents disclosure of the technical details that assist imitators in creating similar products. Non-publication may be beneficial in timing the patent publication and new product launch to occur simultaneously. This is especially important when the development and launch timeline that is longer than 18-months. Non-publication may also hide new business units or research and development programs from the competition until the patents are ready to issue. In some industries, patent publication may adversely impact share prices for public companies and timing of the publication to either coincide or avoid quarterly announcements may be beneficial.

We can only speculate as to Google’s reason for non-publication. However, theIngress game, which presumably incorporates the subject matter of the patents, was launched as a closed beta on November 15, 2012. Any extended confidentiality on easily observable features is effectively truncated based on that launch date (subject to any confidentiality agreements surrounding the closed beta). Many of the other advantages noted above would have been diminished by this closed beta. Some benefit may have been exhibited in that the specific implementation details of the Pokémon Go app would not have been available to the public.

Did Niantic and Google err in their decision to not file patents in jurisdictions outside of the United States? The company and patent practitioner must carefully consider whether maintaining confidentiality of specific implementation details is worth the loss of patent coverage in foreign countries. Some patentees may regret not filing any of the applications outside of the U.S. once their product becomes successful worldwide.

One alternative to maintaining confidentiality on all the patent applications is to segment the inventive aspects of a technology and choose aspects that are easily discoverable in light of a product launch. These easily discoverable features may be the subject matter of patents that will later be filed broadly in several countries. The hidden implementation features may then be filed in the U.S. with a request for non-publication. Another alternative would be to choose the inventive aspect that is critical to the function of the invention and file that inventive aspect more broadly. Companies may further obscure the origin of the patents by recording the assignments late or file the assignments in the name of a shell company.

Overall, it is up to the patentee and patent practitioner to carefully weigh the pros and cons of maintaining extended confidentiality compared to the benefit of receiving protection in jurisdictions around the world. Niantic and Google may not have erred in their decision to surrender patent protection outside of the United States, but patentees should be cognizant of the impact to their global protection of their patent portfolio. More often than not, a patent portfolio becomes more valuable when filed in multiple jurisdictions.

This article is provided for information purposes only and should not be considered legal advice.