Ridout & Maybee LLP is a Canadian intellectual property law firm with offices in Toronto, Ottawa, and Burlington. The firm has over 30 professionals, lawyers, and agents across all three offices and is one of Canada’s longest operating IP firms.

This year marks the firm’s 125th anniversary, where we will be hosting a wide range of events and campaigns, including an employee appreciation event.

1893 saw the beginning of what is known as Ridout & Maybee LLP—of John Gibbs Ridout and James Edward Maybee; however, the roots and reputation of the name date further back. John Gibbs Ridout’s elder brother was Donald C. Ridout, a well-known, successful practitioner, who began his practice the year of the Confederation in Canada, 1867. Donald formed his first partnership in 1869 with an architect, James Smith, under the firm name of Ridout & Smith, Engineers and Architects.

While a simple patent practice in Upper Canada, during a time other big names in the IP world were starting out—Smart, Biggar, Fetherstonhaugh, Dennison, and Riches, to name a few—Ridout and Smith are the Patent Agents responsible for the first patent issued post-Confederation in Canada; a defining feature of the Ridout name. The patent was granted to W. Hamilton for a “Machine for Measuring Liquids”.

The Evolution of the Ridout Practice

Smith departed from the firm in 1873, and the firm became Donald C. Ridout & Co. Interestingly, the firm at the time was described as “Patent Agents and (strangely) dealers in machinery”, a combination one will not find in today’s IP firms.

In the same year, James Edward Maybee—a graduate of the Toronto Collegiate Institute,  expert amateur astronomer, and one of the 3 draughtsmen who started at Donald C. Ridout & Co. in 1882—formed a partnership with John Gibbs Ridout, under the name Ridout & Maybee.

It was at this time that the two partners began work on one of the only textbooks available on patents at the time titled “Ridout on Patents”. The textbook was later published in 1894 by Rowsell and Hutchison and it was paramount in the growth in popularity of the practice of patent law in Canada.

Like many strong partnerships, this one is not without its drama. History books explain how Maybee did most of the work, while Ridout received the profits. Upon John G. Ridout’s death in 1910, Maybee purchased the assets and goodwill of the company from Ridout’s widow and over the following years progressed in both profits and reputation. In the early 1930’s, Maybee was approached by Lord Marks (of the British firm Marks & Clerk) with an interest in purchasing the business but declined his proposal.

J. Edward Maybee retired in 1940, leaving his son Gareth to continue the practice after purchasing all of the business’ assets. Gareth retired in January 1969 and was elected an honorary member of the Patent and Trademark Institute of Canada. 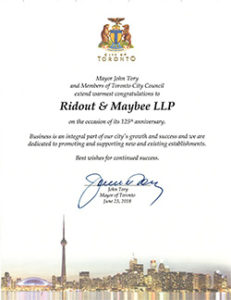 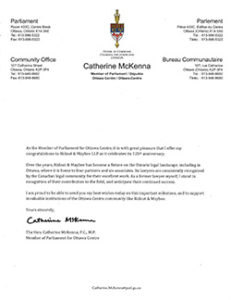 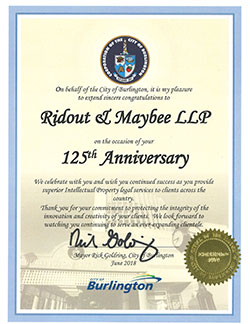 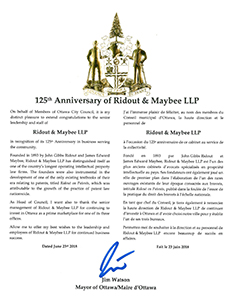